Education Minister Ramesh Pokhriyal Nishank told that the students of 10th class will be promoted. While the exams of class 12 have been postponed till further orders. The Education Minister said that a decision will be taken after review on 01 June. In the event of examination, students will be given notice 15 days in advance. 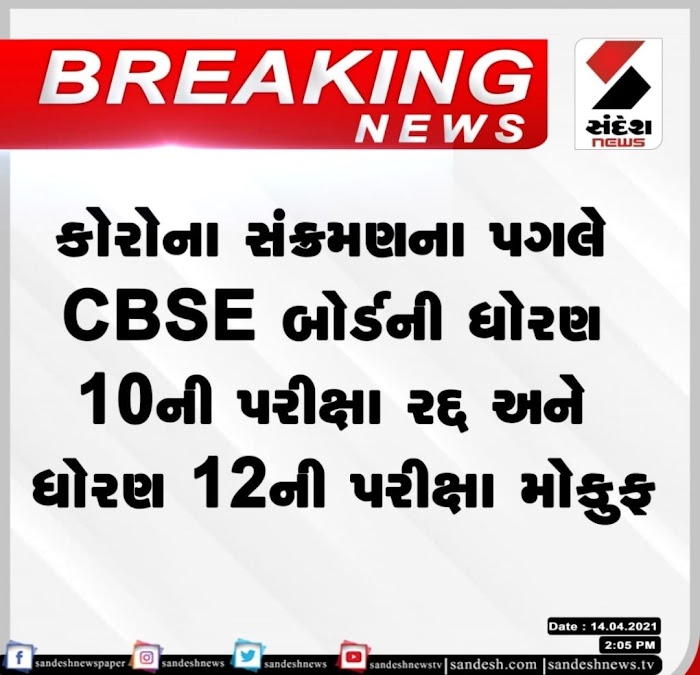 In fact, in the country for the past several days, more than 1.5 lakh new cases of corona are coming out. In such a situation, keeping the exam in many states including the most corona affected country Maharashtra, Delhi, Uttar Pradesh, Madhya Pradesh is a big challenge. Please tell that CBSE’s 10th and 12th board examinations were proposed from May 4 to June 14. This time more than 30 lakh students will join the CBSE board exam.

The students and parents are worried about the conduct of CBSE board exam in offline mode that if a student gets infected corona after taking one or two exams then how will he give the next exam? In such a situation, there will be a lot of anxiety about the exam in front of him. At the same time, if a child has symptoms of corona at the examination center, then how will his contact tracing be done?

Delhi government demands cancellation of examination
The Delhi government has also demanded the Central Government to cancel the CBSE exams. Chief Minister Arvind Kejriwal and Deputy CM Manish Sisodia have appealed to cancel the CBSE board exam in the capital Delhi. Arvind Kejriwal says that if examinations are not postponed, exam centers could become new corona hotspots. Let us know that 6 lakh students appearing in the CBSE board examination are from Delhi.

Questions arising regarding the safety of students

There is a protest against the conduct of CBSE Board Exams in offline mode amid the high speed of Corona across the country. All the people including parents and teachers along with students are against the exam in offline mode in such an environment. There is a demand through social media that consideration should be given to conduct the examination in a safe manner.

What is the problem in getting the 10th-12th board exams online?

Students and parents are questioning on social media that when the cases of corona infection were less in the country, the government had decided to postpone the examinations. But now that the situation is getting worse, why the government wants to make the board examinations offline by keeping the safety of the students at bay.

Maharashtra government made this appeal

The Maharashtra government has also postponed the examinations of the state board. Also, CBSE has also appealed to change the schedule of CISCI exam. Along with the students and parents, now the state government is also pressurizing CBSE to consider board examinations.

The board said this about the exam

Central Controller Board of Secondary Education (CBSE) Examination Controller Dr Sanyam Bhardwaj recently said that we are in the final stages of exam preparation. Expressing seriousness about the health of the students, he said, “We will leave no stone unturned in protecting the students.” Regarding the preparation of the board, Dr. Bhardwaj said that the exam